My heater valve is still functioning but I would prefer to be proactive and replace it before things get wet on the passenger side. I have seen a picture on BB of a modification of a spider heater valve that it was said that 'Jim' makes up. Does anyone know who this jim is and how I might contact him?

There are a lot of approaches to this repair. The one that makes the most sense to me was posted by Greg Gordon a few years ago. It involves pulling the heater core and having a 90 degree x 1/2" hose fitting soldered on in place of the heater valve. This is a simple job for a decent radiator shop. Then camp out with your local NAPA (auto) parts guy and find a 1/2" valve to install outboard. You will also need to make a provision to switch the A/C; there is space in the dash.

Search around here and you will find Greg's post. I believe he also posted a photo and advice on improving the airflow through the heater core.

Rob or someone at Centerline put me in touch with a fellow in Colorado who was manufacturing or had made-up a run of bolt on adapters that replaced the original heater valve with a 1/2" hose fitting (I was unable to hook-up with him). Others have modified a Fiat 124 or 128 valve but not with a lot of success. I grafted parts from a non-A/C Alfetta valve onto my original valve. Another fellow who's name is Ryan and posts on the AlfaBB machined an adapter and I believe had good success. I have not heard from him lately.

Might be an idea for a home business kit.
Scott Shure
Ellicott City, Md
85 GTV-6
Top

Do you know if this solution is applicable to a GTV6 with air-conditioning?

This is the heater valve I found for old VW rabbits, golfs, etc. It is certainly simple enough - but finding a place to mount it in the gtv6 would take some creativity as there is not much room with the shelf right there.

Dang - what did Alfa do with the tooling for these things - or whoever they outsourced them too!

Okay - This could be a better possible as both of these make the "L" shape like our v6 ones - but have no idea on the nipple diameters, etc. These are for the old Datsun Roadster but are readily available at least from this source.

Guess I'll have to wait for mine to break and then get serious about it! But I think I'm coming up do as I'm on my second valve in 180K miles and the last one went at around 140K is my guess.

Hey guys this is how it works you mount it against the heater box upside down so baiscly the cable will attach to the heater lever it works the same as those nasty veglia ones you should connect the pipe with an L shaped bend to it in order to get it to work I Made the Modification to the car. This Sunday I will be fitting it on will post some pics

Terry Johnston wrote:My heater valve is still functioning but I would prefer to be proactive and replace it before things get wet on the passenger side. I have seen a picture on BB of a modification of a spider heater valve that it was said that 'Jim' makes up. Does anyone know who this jim is and how I might contact him?

Not much activity on this topic. Just found your post . . . I'm Jim. Here's a diagram of the adapter for the spider heater valve. The adapter is stainless steel so you don't have to worry about corrosion, and bolts directly to the heater core flange. The lever on the valve is designed to provide the same movement of the control cable, but the cable will need to be shortened. 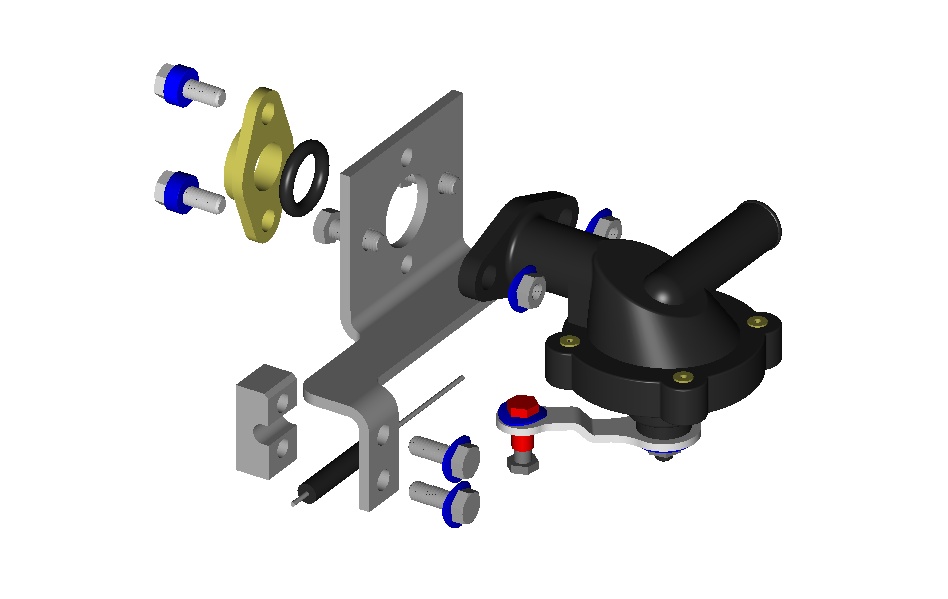 wow that would be a cake walk to make....be nice to be able to finaly kill water flow thru the heater core again

i simply used a small 3/8s inch piece of flat place cut it to match the old opening , drilled it out and welded a steel nipple to it...sure i dont have a valve now but it kept me on the road